I am reposting some of my LEE blog posts over here to highlight some of my research blogging. Hope you enjoy the ladybusiness anthropology!

If you are female and post-menarcheal (that is, you’ve had your first period), you have probably had at least one person tell you that you are PMSing – either jokingly, or with an unpleasant edge. You may have expressed anger or irritability; you may have simply stood up for yourself. Or, you may have no idea what prompted the statement.

Maybe you were angered further by this comment, because you have never experienced any shifts in mood in your premenstrual phase (the several days leading up to your period). Maybe you were embarrassed because, whether or not the comment was at the time accurate, you do feel different right before your period. There is a lot of variation in the emotional experience of the premenstrual phase, from no changes, to dysphoria (that’s mild depression) or anger and irritability, increased creativity, well-being and happiness, to a whole host of other feelings. Part of this variation is a small minority of women who do experience negative symptoms strong enough to interfere with their daily lives, often called premenstrual syndrome. A syndrome refers to the association of symptoms and/or signs that often occur together, but that does not mean the etiology, or origin, of this syndrome is the same for everybody, and that does not mean everyone has the same disease if they have the same set of symptoms. This distinction is important because there are several syndromes out there relevant to women’s health (polycystic ovary syndrome and chronic fatigue syndrome come to mind), yet it is a classification that says, to me, “hey, we don’t know what causes this and in fact it may be a whole bunch of different things going on for different people, but this is what we have so far.”

Despite the fact that the experience of the premenstrual phase is varied, and the negative symptoms some number of women experience are categorized by a syndrome which does nothing to explain its etiology, there appear to be only two games in town in treating PMS: hormonal contraceptives (HCs) and selective serotonin reuptake inhibitors (SSRIs). And the most studied potential origin of PMS is progesterone withdrawal.

Now, a twenty-eight day, ovulatory menstrual cycle looks like this: 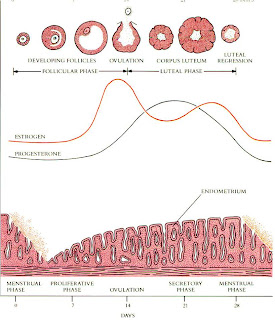 Notice the estradiol (that’s a kind of estrogen) peak just before ovulation, and the swell of progesterone (pro-gest, so supporting gestation should you conceive) in the second half of the cycle. Progesterone is secreted by the corpus luteum, which is left behind by the follicle that erupts from your ovary when you ovulate. If that egg is not fertilized, to wend its way through the fallopian tube and invasively implant its way through your endometrium, then that corpus luteum and progesterone doesn’t have much of a purpose. Without a signal that pregnancy has occurred, the corpus luteum degrades, progesterone concentrations decline, and your nicely primed endometrium sloughs off to be able to make another plush surface for the next attempt.

Allow me to briefly wax anthropological before moving on in my discussion of these premenstrual symptoms. This twenty eight day cycle with its nice estradiol peak and progesterone swell and ovulation smack dab in the middle? It’s pretty much a farce. 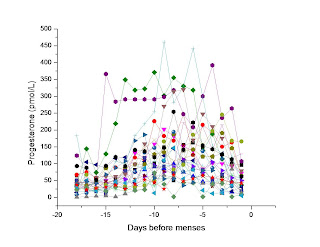 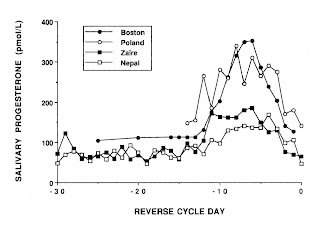 Those are real luteal progesterone concentrations from healthy, normal, reproductively-aged women from past studies of mine in one population of women in rural Poland (the follicular phase is the first half of your cycle, luteal phase the second). And the next image is from a whole bunch of other studies showing population variation in progesterone. Regular menstrual cycles, and yet luteal phases that range from 9-17 days. Mid-luteal progesterone concentrations varying by several orders of magnitude. You are looking at data ONLY of healthy women, in a homogenous rural environment, and ONLY cycles where they ovulated. And yet, look at all that variation.

So hormone concentrations, menstrual cycle lengths, experiences of the menstrual cycle and menses themselves, vary so much so that the idea that there is such a thing as one normal cycle for everyone is patently false. Women’s reproductive functioning only makes sense in the context of its environment, and if it is responding logically (high stress, low function, and vice versa), it’s pretty safe to say that woman is normal.

Okay, so back to PMS and progesterone withdrawal. You may have noticed something in the preceding images: progesterone concentrations decline in the days leading up to menses in all ovulatory cycles. In a physiological process with so much variation it’s hard to determine universals, this is one of them. So I suppose it makes sense, then, that researchers think progesterone withdrawal has something to do with premenstrual symptoms. Further, post-partum depression or the maternity blues occurs soon after parturition, when a mother goes from having huge quantities of progesterone (orders of magnitude higher than in a regular menstrual cycle) to zero, once that placenta that was making all that yummy progesterone is birthed.

At the same time, if these symptoms are not universal, if in fact some women have positive experiences of their premenstrual phase (and post-partum period), and to top it off progesterone withdrawal is a major feature of the menstrual cycle for most women… then perhaps the idea that progesterone withdrawal is the trigger only serves to further pathologize a population that is historically overpathologized and understudied. That is, does it make sense to consider a universal feature of the menstrual cycle the culprit for a set of symptoms that affect about five percent of the population?

Several studies indicate an association between decreased ALLO concentrations and premenstrual syndrome and post-partum depression [1-6]. Gracia et al [3] also note lower ALLO concentrations in those individuals suffering from PMS who are responsive to SSRI treatment, versus unresponsive individuals. So it does seem like those with lower concentrations of ALLO (and thus lower progesterone at that time as well) are perhaps more likely to have PMS. However, it also looks like reduced ALLO isn’t the only explanation for PMS: 1) only 63% saw improvement with SSRI treatment, and 2) the women in this study (n = 46) were grouped into tertiles by their ALLO concentrations, and the highest tertile (the women with the highest ALLO concentrations) did not show improvement. So it seems it is possible to have PMS without low ALLO relative to your population.

The second issue, that it may not be total levels of progesterone/ALLO triggering PMS symptoms but rather something about the rapidity of decline (an understandable hypothesis to start from given what we know of post-partum depression) is not as frequently studied. But I did find one study that examined this and managed to review a few articles I hadn’t yet found: Beckley and Finn [1] described work that suggested more rapid decline in progesterone concentrations was associated with depression-like behaviors in rodents, and themselves found similar results both when creating progesterone withdrawal conditions with supplementation, and when using finasteride (which inhibits progesterone metabolism; also known as Propecia). 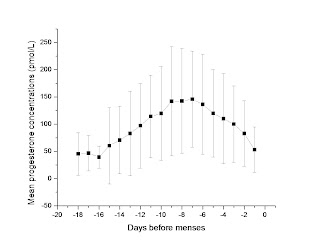 I think the idea here and the results are tantalizing, but I am not yet confident in the mechanism. Part of the reason for this is that in human studies women were only sampled once per cycle in the luteal phase; often something like five plus or minus three days before menses. If you look at the graph above (this is the same as the second figure, just the mean and standard deviation instead of the concentrations of each individual), that six day spread (-8 to -2) shows a significant amount of time-dependent variation in progesterone concentrations. Further, progesterone is strongly influenced by age, energy balance, energy expenditure, and population (developmental conditions) [7-14], and I am unclear whether this variation has an impact on these results or can be controlled for in future work. One last point to consider is that social influences on perceptions of menstruation, as well as degree of social support, urban versus rural setting, and level of education, predict premenstrual syndrome and post-partum depression quite strongly [15-18]. We need to be careful when examining something that is a product of the interaction between biology and culture not to simply look at the concentration of a hormone to explain its etiology.

These are the archives for Dr. Kate Clancy's blog Context and Variation. You can find her at her new digs, at the Scientific American Blog Network, here.

This work is licensed under a Creative Commons Attribution-NonCommercial 3.0 Unported License.

Where else can you find me?

Scientific American Guest Blog: I don't have a 28 day menstrual cycle and neither should you

Wired Science: Neuron Culture: The dilemma of women in science blogging: Even when we want something, we need to hide it

Jezebel and AGORA: Why I'm an activist scientist for women's health

Open Lab 2010: The finalists and Where to Buy It

Laboratory for Evolutionary Endocrinology
See who has tweeted my blog posts at Topsy.